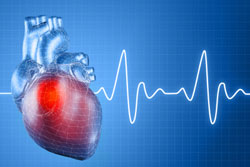 CoQ10 is present in every cell of your body. The highest concentrations are in your heart. It helps strengthen the walls of the heart which in turn helps your hearts ability to pump fresh oxygenated blood through your cardiovascular system. There are many reasons why supplementation may be beneficial, even necessary in your own personal life but instead of listing those reasons here I am going to let the experts tell you so you’ll understand how important it may be.

If you are on statin drug therapy to lower cholesterol beware because it is a fact that statins also inhibit your body’s ability to produce CoQ10. If you are on a statin drug it is extremely imperative that you supplement with CoQ10.

Beta blockers which are often used to lower blood pressure also inhibit CoQ10. If you are on a beta blocker for high blood pressure or to lessen the chance of a second heart attack or to control an arrythmia (palpitations) you may want to buy some  quality supplements.

Reasons to take CoQ10 according to the experts at University of Maryland Medical Center. Scroll to “other” for confirmation of needed supplementation when taking statins or beta blockers. 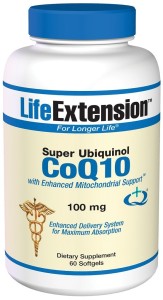 As said earlier CoQ10 is vital to the smooth functioning of your heart and body.

Super Ubiquinol CoQ10 with Enhanced Mitochondrial Support™ 100 mg, 60 softgels Life Extension has consistently introduced more potent and better absorbed forms of coenzyme Q10 since the product first came on the market in the early 80s. The new Super Ubiquinol with Enhanced Mitochondrial Support™ contains an organic compound called Prima Vie® shilajit that research has shown to double levels of CoQ10 in the mitochondria.

2 Researchers have found that shilajit works to boost CoQ10’s beneficial effects by: Stabilizing CoQ10 in its superior ubiquinol form, thereby prolonging its action at the cellular level.3,4 Facilitating more efficient delivery of CoQ10 into the mitochondria, resulting in greater cellular energy output.