Over 10 million Americans suffer from the angina, yet many people have never even heard the term. The above video and this short article will endeavor to explain angina so that you have some basic knowledge. 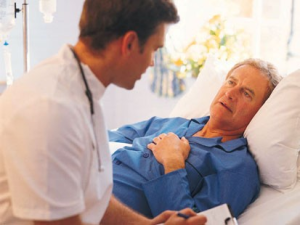 If you’ve been diagnosed with angina, you are not alone: angina affects more than 10 million Americans. The most common cause of angina is coronary heart disease (CHD), the most life-threatening of the disorders that can affect the body’s cardiovascular system. Coronary heart disease is the number-one cause of death in both men and women in the United States.

In most people with coronary heart disease, the underlying cause is atherosclerosis, the buildup of deposits called plaques within the walls of arteries. These plaques decrease the size of the artery’s lumen, the channel or space through which blood flows. When atherosclerosis develops in the coronary arteries, it can decrease blood flow to the heart, causing chest pains called angina, or it can completely block blood flow, resulting in a heart attack.

Atherosclerosis doesn’t develop overnight; it is a slow process that can take many years. It typically occurs after decades of lifestyle behaviors that lead to the accumulation of cells, fat and cholesterol on the once-smooth inner lining of the arteries. This process typically starts with injury to the endothelium (the thin layer of cells that lines the arteries), often because of inflammation or exposure to toxins such as cigarette smoke. The damaged endothelium then attracts white blood cells, and these cells and low-density lipoprotein (LDL) cholesterol (also referred to as “bad” cholesterol) enter the inner surface of the artery.

As LDL cholesterol accumulates, along with calcium and fibrin (a blood protein), it forms plaques (a waxy substance composed of hardened fat and cholesterol) that increase in size, narrowing the arteries and interfering with blood flow. When coronary arteries become narrowed by 60 to 70 percent, blood flow to the heart may be insufficient during periods of physical exertion or emotional stress. The resulting deficiency of blood (ischemia) to the heart muscle typically causes episodes of angina.

If a plaque tears or ruptures, a blood clot forms that can completely block blood flow and cause a heart attack. A heart attack can also occur when a clot breaks loose from a plaque and travels downstream until it completely obstructs a smaller coronary artery.

Many people are unaware they have coronary heart disease, particularly if they haven’t seen a doctor regularly to undergo routine screening tests. In fact, as many as three to four million people have no symptoms despite insufficient blood flow to the heart, a condition called Silent Ischemia. Eventually, however, symptoms occur in most individuals with coronary heart disease. The most common initial symptom is chest pain. The chest pain can be a sign of stable angina or an indication of something more serious like unstable angina or a heart attack.